Hi everyone visiting this blog, let me first introduce you to the purpose of this blog.

First of all, this blog is meant for different reviews of stuff I’ve fitted to my bike, and some commentary on my own daily rides, so you can expect some more fine content.

It’s still in its baby steps, but I’ll try to get it updated as soon as possible.

Second of all, let me introduce myself for the moment.

My name is Alexander, currently 21 years of age, and I’m facinated by motorcycles.
Adventure motorcycles in particular.

I was bit by the motorcycle bug a few years ago when I was 18. Looking at enduro riders being hooligans, supermoto wheelies, you know 🙂

I’ve mounted new grips, exhaust, seat cover, rear fender and a bike speedometer.
I’ve reached about 70km/h on this bike, and it was really fun, for 2 months that is.
Then I had to go back to school, not having a normal way of transportation, I sold this bike for about -,€250, that is a €150 profit!

Since I didn’t have a motorcycle license (because of the stupid Belgian laws), I bought an orange moped.

Not a normal orange moped, a Chinese orange moped, called the X-Motos XB-33 – 50W.
Restricted to 50cc’s and 45km/h. I got the license for my moped with my drivers license.

As a normal youngster (of 19 years old) I was speed driven. Everything had to go fast,
and 45km/h is not fast enough for me.
I began tuning the orange moped sumo with first raising the top speed using a different gear ratio to 60km/h, but redlining the bike was bad for the cylinder, and broke it.

A replacement cylinder, piston and head costed almost the same as a 75cc kit.
Knowing nothing about engines etc, I just disassembled the block and installed the 75cc kit. Offcourse if it aint fast and loud, it aint for me. So I’ve bought a straight pipe for it.

The thing was loud, and luckely I didn’t have any contact with the police 🙂
It rode about 70km/h.

On my 20th birthday, I’ve taken a theoretical exam, which I did pass with 46/50.
I immediately went to the local driving school to start my lessons.
To pay for these lessons, I had to sell my (th)rusty orange moped.
Luckely I still got -,€500 for it, so no sweat.

My dad also helped me by paying a part of the cost for my lessons, whichfor i’d thank him very much.
It was a whole new world to swap from 75cc to 650cc. It steered more difficult.

The learner bike was a Kawasaki ER-6 from 2009 with a full on crashcage.
In my lessons, I fell about 5 times, all at the figure of eight and the slow riding practice.

Let’s skip a few months ahead…

I bought my XF650 Freewind in november, a month later when I started my lessons, knowing I’d be riding very soon.
I paid about -,€1000 for the bike, excluding the taxes and insurance. 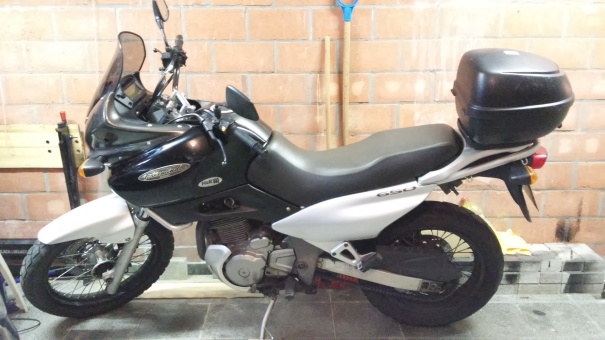 I failed my driving test for about 2 times, and had to take extra classes, which costed me also an arm and a leg. In the end I’ve finally gotten my provisional license, and was good to go to ride my Freewind.

Then I was ready (although I thought)
….
I did my driving test again, with my own bike, all went great till…
I drove in the wrong direction, disaster struck, I failed AGAIN!
I immediately signed up for extra lessons, and a new try.

And finally, after about 4-5 times, I finally got my motorcycle license!
I was so relieved that I didn’t have to pay the examination center and the driving school another penny (or cent).