Since I’m already on my second year of riding my motorcycle, the lowered seat height is a bit weird looking. I lifted the front and rear suspension a little bit, but then my kickstand was too short and made the bike almost fall over.

Voilà! An extended side stand! 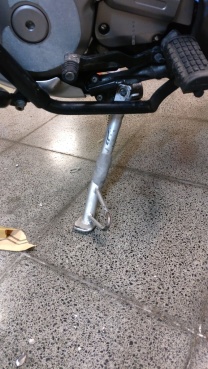 It IS sturdy, believe me. I didn’t like the look of it afterwards and wanted to weld it. Tough luck, I don’t have a welder.
So I went to the car dealer that my mom and dad knew for about 20 years and asked if they could weld it up for me, they could do it, but first I had to remove the Bison Kombi Stick.

I hammered, forced the nuts, twisted and chiseled my way through the Kombi Stick, and man, that material is hard as sh*t. It wasn’t even neccesary to weld it, but since I’m already destroying it… I also prepared the metal for welding (removing paint).

They welded it up for me, but it wasn’t that good of a job, but I can’t do better than that.
But hey, “A grinder and paint makes him the welder he aint”. It needed some heavy grinding and cleaning up of the weld.

This is the result after painting it with some cheap spraypaint: 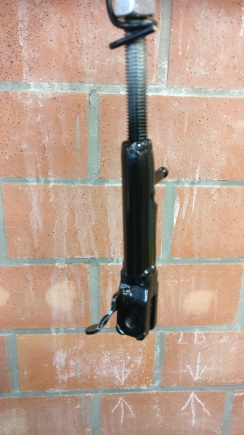 Then assemble it and there it is! 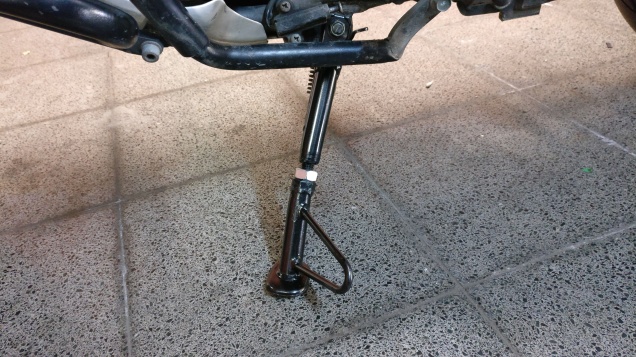 Looks a lot better now and is finally adjustable. No need for cutting and welding ever again. The threaded rod insert is also very long which increases the internal structural integrity of the kickstand.

One thought on “How (not) to extend your kickstand”